NEW MEASURES IN PLACE FOR ERTE

NEW MEASURES IN PLACE FOR ERTE

After several weeks of negotiations, in extremely difficult circumstances, last week the Government and unions reached the II Social Agreement in Defence of Employment, whereby among other measures, an agreement was put in place to maintain the temporary employment regulation procedures, whilst also introducing new measures on this matter.

These new measures are provided for in the Royal Decree-Law 24/2020 of 26 June on social measures to stimulate employment and protect self-employed individuals and the competitiveness of the industrial sector.

Although the state of emergency has come to an end, our country’s economy is still a long way from recovering. For this reason, companies and entrepreneurs must continue to implement a series of extraordinary measures. These procedures are provided for in; the Royal Decree-Law 8/2020 of 17 March on extraordinary urgent measures to deal with the economic and social impact of COVID-19 and the Royal Decree-Law 18/2020 of 12 May on social measures in defence of employment, which prolonged the measures taken in temporary employment regulation procedures until 30 June.

The new Royal Decree-Law prolongs the measures adopted by the temporary employment regulation procedures due to force majeure, as well as those due to economic, technical, organisational and productive causes until 30 September 2020, as well as the unemployment protection measures.

The main new developments concern the procedures involving suspension and reduction of the working day due to economic, technical, organisational and productive reasons. In particular, companies will be exempt from paying the company contribution to social security and for joint collection which previously only applied to cases of force majeure.

Additionally, the procedure may be initiated while an ERTE due to force majeure is in place. When it is initiated after the termination of an ERTE based on the provisions of article 22 of the RDL 8/2020 of 17 March, the date of effect will be backdated to the date of termination of the previous ERTE.

Before explaining the new developments regarding contributions, it is important to point out the express prohibition on overtime as well as new hiring (direct or indirect) and outsourcing of the activity. The only exception is when employees who provide services in the workplace concerned cannot carry out the functions entrusted to them due to training, qualification or other objective and justified reasons.

Companies that have their tax domicile in countries or territories classified as tax havens cannot implement ERTEs.

Furthermore, any trading companies or other legal entities benefiting from these measures may not pay dividends for the tax year in which these temporary redundancy schemes are in force, unless they previously pay the corresponding amount of the exemption applied to the social security contributions and waiver their right to them.

– Exemption for companies with less than 50 employees:

– Exemption for companies with more than 50 employees:

– Exemption for companies with less than 50 employees:

– Exemption for companies with more than 50 employees:

Companies which, as of 1 July are prevented from carrying out their activities, due to the implementation of new restrictions or containment measures, will have an 80% exemption for companies with less than 50 employees, and 60% for those with more than 50 employees, until 30 September. 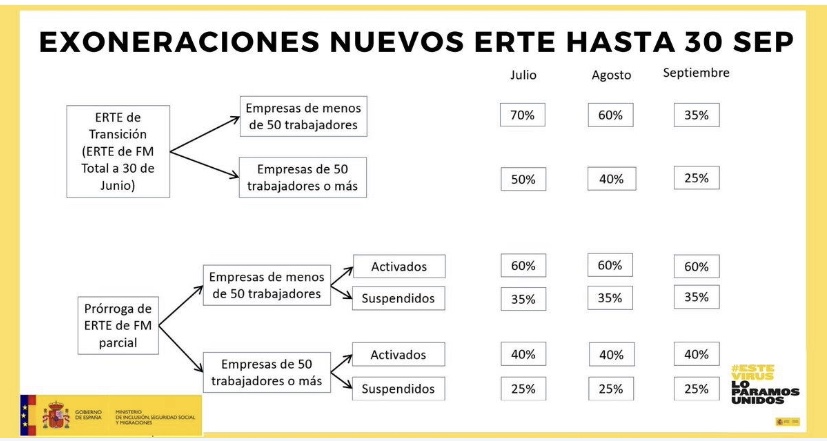